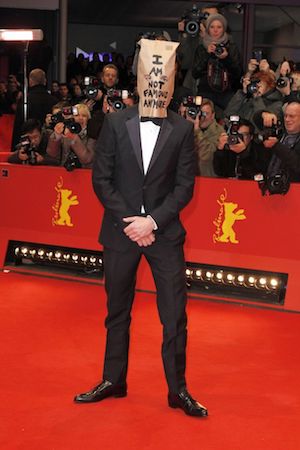 Now, hipster-bait is basically someone like Shia LeBouef: something for people to talk about over a craft beer. Somewhere in between James Franco (who I think is more malicious and just all round creepier/douchier) and Justin Bieber (who I think is unfairly maligned/scapegoated) and certainly not Kanye West, who is doing important work and who we like and will always defend. Bieber needs a hug, Franco needs a slap. But someone like LaBoeuf? Maybe they can use a sandwich.

An important part of what makes someone hipster bait is that elusive quality of ‘putting it on’, that is, having fun with their fame like a real wanker because they can’t accept just being a regular famous person. Not to say there isn’t an honourable hint of true madness in many hipster bait celebrities – including LaBouef – not including Nicolas Cage, in my humble opinion – including Crispin Glover. Also, Bill Murray is not hipster bait at all. He’s just a dude doing the best he can.

There’s a lot of controversial fun to be had around hipster bait. Obviously, debating whether or not someone’s personal darlings and saviours are, in fact, hipster bait (Miranda July? Chevy Chase?); but also, hipster bait as a respectable move, for instance, Chuck Lorre’s Vanity Cards: I see them as a kind of meta-narration of his mediocre and very lucrative comedy. An almost Matrix-like, lifting-of-the-curtain moment: “Hey, here’s the big name behind the last twenty minutes of light entertainment! I’m plodding through, money hasn’t brought me happiness, but at this point you didn’t really expect it to did you? No I don’t do this strictly out of love for the craft. But I still think I’m lucky to get to do it, despite some dark days, anyway, nice to speak to you, hope you had some fun watching this”. Surprisingly, vanity cards haven’t become a terribly well-known thing, they remain an uncomfortable curiosity for most. Think about that for a moment, it is worth noting. The world will discuss Shia LeBoeuf maybe once, two times a year or so? And consider Nicolas Cage ‘weird’, but so far I haven’t seen anyone do much about Chuck Lorre’s Vanity Cards. It’s not impossible that they hit too close to home. In a funny way, that gives me hope… a bit.

Hipster bait can just be what any of us would do if we were famous: we’d use the public’s attention to support our pet causes, we’d enjoy subverting expectations, crashing parties, indulging in whimsical hobbies. The fact is I can’t think of a single celebrity who hasn’t had their hipster bait moments, and that makes me realise it is more important to analyse our reactions to hipster bait than it is to analyse the motivations behind it. Be honest, how annoying would you and your friends be if you were Hollywood stars? How many of you are vegan, or 9/11 truthers, or refuse to wear a standard costume for Halloween, dressing up as cereal boxes or controversial religious figures instead, or have an unusual pet, or have a mantra tattoo you regret?

A special case I would like to discuss is Steve Buscemi, who as far as I can tell is just a genuinely good actor who happens to be funny looking. I once asked Jack in an e-mail what he thought about Steve Buscemi ("I can't believe I've never asked you this!") and he wrote this in return: “I like him. I like when he dressed up as a fireman for 9/11 (SUCH A HIPSTER-BAIT STORY). Also, he's rocking out male pattern baldness, and he's just made looking weird very cool. He made a career out of looking weird! And he's always looked the same age. I like people who manage to mess with the fabric of time like that. If he were French, he'd be the biggest French actor, you know what I mean? I can imagine French people, French hipsters looooovvve Steve Buscemi. You can just hear them pronouncing his name all French.” 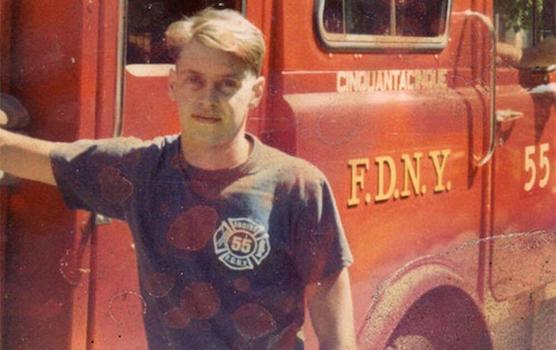 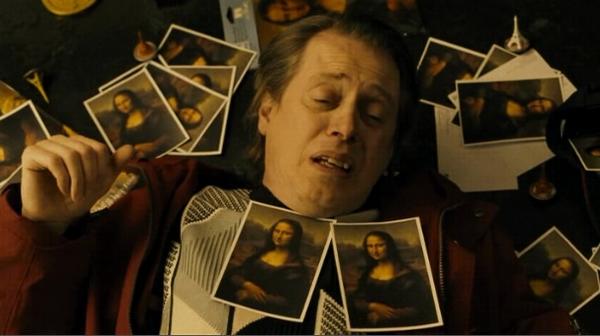 What I would like you to take away from this is: Have compassion with the hipster baits of this world, but also try not to waste too much time with them. For they are just like everyone. People are like that, well-meaning, but with much less to say than they think. Maybe hipster bait has the power to reflect us back to ourselves. Hopefully, hipster bait will inspire us. Its social function is to expose the reality of making things, which is that everything is either pathetic or sterile, with very few options in between short of being one of those kooky Italian church painters. At its best, hipster bait is a celebration of both the pathetic and the sterile. And if you think about how Elijah Wood has over 4,000 records in his collection and still says his favourite band are the flipping Smashing Pumpkins (everyone’s third or fourth favourite band when they’re 14), you’ll realise that all he’s doing, all that anyone is doing, is getting up in the morning, then moving around, then going back to sleep; that no matter how grandiose the things you do might feel, they’re still just happening one after another in-between bursts of hunger and tiredness, that it will always be difficult to focus. There will be the task at hand, and there will be disorientating, conflicting impulses swirling around inside of you, always. You’ll realise that existence is much more circular than linear, and maybe your world will feel a bit simpler, and you’ll feel a bit more relaxed.

Paul Ridges, Ridge Racer
A baked bean tin pot dictator
Save the legumes for later
Wake and bake off and here’s the moderator

How come they smoke so viel
Jokeless broke potent zeal

Still feeling like a target
Man for all these bros
Like a target’s been drawn on me
But that’s my cross to bear
My X to carry
Nought to do with Chris Cringle or Barry
Ivan the incredible storytelling Larry
And my targets less like a crosshatch
And more like a baldpatch
Cross Hair, Who Care?
I’m still happy as LD
When Seinfeld channels Gary
Shandling from beyond the G-R-A-V-
E Get me?
Rest in piss
Or buried at sea
Arrested Yes
On charges quite speedy
Speeding, no
Merely enjoying some class b
that me thought was class k
but turned out to be
mark e’s gurny mouthed
'phetamine
Sure he’s looking on heckling.

We're currently playing a fun game called Cultural Revolution. You have a few categories of things you'd change if you suddenly became installed as a Mao style dictator. I'm sure Jeremy Corbyn plays it all the time. The idea is to implement your measures as soon as possible. You have no time to think. They're looking for you to change things, so impulsivity is key, go mad with power!

Name: Talita
People to be executed: I've recently changed my mind about this and find execution slightly gauche. But maybe Dermot O'Leary. I don't know why.
People to be sent to Greenland for reeducation: People who hate Comic Sans, People who say "Have you heard of Eckhart Tolle?", People who say "Have you heard of CBT?", Anyone who likes Dragon's Den for reasons other than it's funny to watch sometimes, Women that refer to other women as a "badass", Circus enthusiasts, People who dream of living in a tiny house, People who throw Game of Thrones viewing parties, People who say something like "My eyes!" when they see an old/amateur-looking website, People who share those pictures of hot tubs under starry skies in Iceland on Facebook, Anyone who wears too many rings
Articles to be incinerated or publicly burned: Everything shiny, Everything dangly, Coconut rings, High-heels, Nylon magazine, Double-digit iPhones, The Sims 4
Articles to be lauded: Disposable cameras, sandwiches, public libraries, laser domes, ferries, menstrual cups
Illegal activities: Taking up knitting as a New Year's resolution. That's it.
People to be promoted to positions of power/prominence: Miley Cyrus, nice nursery teachers, interactive fiction writers, high school dropouts, cool hackers.

Name: Jack
People to be executed: Call me a wuss, but I still can't think of anyone I hate that much.
People to be sent to Greenland for reeducation: People with noserings, Men under 40 with tattoos, People with dreamcatchers, Food critics (including amateur instagram food critics), Anyone who talks about restaurants as part of their holiday story, People who think the comments section on Youtube should be disabled, anyone who pines for the 'good old days', People who think they know the 'truth', People who complain about something they read on the internet, pPople who give those overly strong handshakes thinking they're cool, Anyone who likes The Apprentice or thinks business is interesting, Anyone who talks about their job and knows it's boring but won't admit it and pretends it's grown-up, Piers Morgan, People who write bullshit motivational or lifestyle entries on websites such as Thought Catalog or Mental Floss, with titles like '15 Things you must do before...' '12 Ways you know...', Anyone who is a lifestyle coach or variations thereof, Anyone who's been on a gap year or travelled from West to East to 'find themselves', Anyone who considers themselves an authority.
Articles to be incinerated or publicly burned: Kindles, Apple Watches, Those energy bracelets, Ray Ban sunglasses, Netflix, Acoustic guitars, Top Knots, Amazon (website not jungle), All cars except for smartcars and those built before 1990, All bikes built after 1990, DJ decks, Phones built after 2010, Any shoes that are neither trainers nor smart but somewhere in between, 85% of the internet.
Articles to be lauded: Wrap-around microphones, bluetooth headsets, phones built before 2010, those hoverboards that people go around on, mountain bikes, scooters and motorbikes, big shops, train stations big and small, croissants.
Illegal activities: Sitting on the floor, smiling too much, taking group photos with drinks in hand, possessing and/or publishing over 200 photos unless a professional photographer.
People to be promoted to positions of power/prominence: Tom Cruise, Victoria Beckham, Bus drivers, Breakfast chefs at cheap places, the nice people who work at McDonalds, anyone who is homeless because they genuinely fucked up.

Talita: I made this video inspired by the Purple Noise movement, almost six months ago in a frenzied Sunday morning. I don't think I'd ever edited a video before, apart from a few experiments with Windows Movie Maker when I was a kid - I wasn't even aware that my Mac had a video editing tool, I just downloaded the first one I found on the internet and yeah, it turned out to be paid and a jerk because it would let you edit your video, but it would plaster that ridiculous watermark on it after you'd done all your work and then ask for like 80 pounds for the "feature" of removing it... I kept telling myself I'd make it all over again and edit it on iMovie, but never recovered the momentum. I still think it's pretty funny, so I decided to put it here anyway. Maybe the watermark even adds a certain something.

The Bomb and How We Built It

Talita: Decided to give this long story I wrote when I was 18 a home on the internet. I think it's quite an easy and fun read.