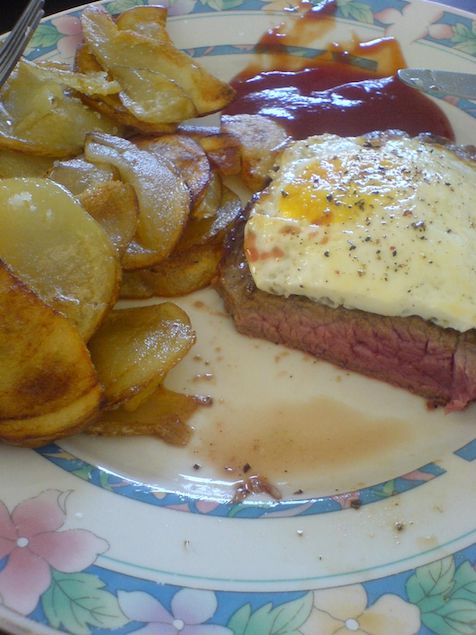 I always thought I knew how to make steak and chips and then every three months or so I would try it and fuck it up. Usually the steak. But now, through spying on my dad and learning some basic cookery skills, I think I’ve got it. This won’t be perfect, but it will be what it will be.

Get some potatoes, wash ‘em and cut them up like how you want to eat them. Some people like them more cuboid, some like them flat and thin. Just don’t cut them too thin. This is more the bratkartoffelen style - how the Germans do it - than French fries or pub chips or anything like that. I’ve heard my dad’s friend say that the best way to make chips is to freeze the potatoes, because that removes the starch. But I don’t like to think about things too much in advance. It’s just not how the world is. You should be able to see some potatoes in the morning and be cooking them by the evening, even the afternoon if you don’t have too much on. Also, chips are a perfectly fine breakfast lunch and dinner food. Cold chips are especially nice in the morning, with ketchup.

So you have your washed potatoes cut up into chunks. Next, boil a big pot of water with salt and put them in once it’s boiling. They should bob about for a few minutes. I think eight is probably the right amount, but you can tell by getting a sharp knife and attempting to skewer one of the chunks with it. It’s kind of a fun exercise, like apple bobbing or spearfishing. If your knife can sink into a chunk of potato with ease, then they’re done.

Drain the water and put the potatoes onto some kitchen towel or a towel, something to soak up the moisture. Pat them a bit.

Put a pan on medium heat, pour enough olive oil in so that the bottom of the pan is oily, so that the potato chunks will be not submerged but not just paddling: they would be up to their potato chunk waists.

Hold a potato chunk tween your thumb and forefinger and dangle it towards the oil. If when then chunk comes into contact with the oil it makes that satisfying sizzle sound, then it’s game on! Drop it in and all the others along with it. If not, then have patience and try again in another couple of seconds, minutes.

The potatoes are in an sizzling. Leave them. Leave them for a good four to five minutes. Then it will come time to turn them. Tilt one up on its axis with whatever spatula or spoon you are using. Not your fingers this time. Things are hotting up. If it’s brown on the underside, you can flip ‘em. Flip ‘em carefully. We don’t want any unevenly cooked chips now.

Leave them for another five minutes or so and then when they’re brown on both sides turn the heat right down and allow them to just stay warm.

Take your chips out and rest them on some more kitchen towel to soak up a bit of the oil (though I like oily chips). Then serve them with your steak!

I don’t know about cuts. Just get something that looks good and isn’t too expensive. I’d say rump, tenderloin or sirloin or ribeye. The important thing is to leave it out of the fridge for at least two hours before you cook it. That’s really important and something I always forgot. While the chips are cooking, take your steaks and lay them out and hit them a bit, just light taps to tenderize the meat.

Then drizzle a little olive oil on them, rub in some salt and black pepper. Turn them over and do the same on the other side.

Once they’re ready, put a frying pan on high heat. Don’t put anything on the frying pan, just leave it until it starts smoking.

Then you want to place your steak onto the frying pan – it should sizzle very nicely – and leave it for one minute. As soon as the minute is up, cut the heat and turn the steak over and leave it for another minute. You can shorten this part by thirty seconds if your steak is particularly thin or you like it very rare in the middle. Once the minute is up, take you steak off the frying pan and onto the plate and rest it for a couple of minutes.

Serve together with your chips and maybe a bottle of red wine and you are laughing.